Hows this for keeping cool? It was very hot again today and Annie will always follow me around and she was looking a bit hot and panting, so I soaked this old tea towel in cold water and after wringing it out I draped it over her. She happily swanned about wearing her evaporating cool coat for hours, even lying down and having a sleep in it, I kept putting my hand under the towel to check the heat level and it was amazingly cool, she obviously liked it. 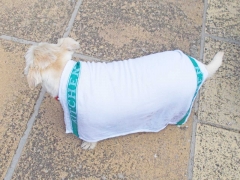 Nice one H, I might try that one myself

I thought LLL's suggestion to RS to fill a hot water bottle with ice cold water to help cool her in bed if her DH insists on switching off her room fan.

At one time long long ago in a land far away I was sewing neckerchief things for soldiers in Iraq via the US military. For the life of me I can remember the sewing but the pattern was such that something was put into these that the soldiers soaked down to keep cool but I have no memory (or at least no memory that is coming to me) of what went into these. I'm positive something did. These were crated off to the guys to wear in the desert.

In Trinidad I've often carried a terry cloth wet towel. And would drip my water bottle water onto it and them squish it out down my neck & back to keep cool.
Top

It is a scientific fact that when water evaporates it will cool the item it is evaporating from, we used to have canvass water bags that we used when out in the African bush, they were designed to leak and would form a dew like layer on the outside. We would hang them in a tree preferably in some shade and they would keep the water cool all day as the outside dew evaporated.

Bit like the flower pot fridge. Terracotta pot with food in it in a bigger pot filled with sand that surrounds the smaller one - Sand kept watered, Big pot cools.