Not really a travelogue, just somewhere to visit

I mentioned in another thread that we would be away for a couple of nights on a visit but although not another castle, something that has or had a castle would be involved. We in fact went to Portsmouth Historic Dockyard and the castles in question would be those on the sixteenth century Mary Rose and the eighteenth century HMS Victory. (Their forecastles and aftercastles)

The Mary Rose
The remains of the hull of the Mary Rose, Henry Vlll’s flagship, was recovered intact in 1982 from The Solent off the Isle of Wight, where it had lain since it sank during a battle with the French in 1545. Along with the hull a total of around 26,000 artifacts were also recovered including body parts of the sailors and even the skeleton of the ships dog. I had seen the hull in 1995 in its temporary building still being constantly sprayed to prevent the timbers drying out and deteriorating. A new multi-million pound state of the art museum opened in May. This has been constructed around the hull which can now be viewed without the sprays playing on the timbers. The spraying process continues outside visitor times and the stabilisation process is expected to be completed in 2015. At that time most air conditioning and environment control equipment will be removed and the remains will then be viewed in an uncluttered state.

The museum is set on three floors representing the three main decks of the ship and around each gallery are displayed artifacts that would have originally been at that level on the ship. It is most impressive and everything on display is original except where white acrylic parts have been introduced where original parts had completely deteriorated. Here is a selection of pictures of the museum: 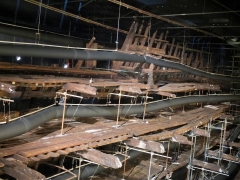 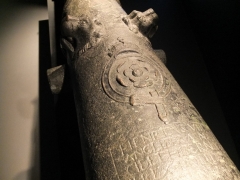 HMS Victory
HMS Victory is displayed in dry dock just across the quay from the Mary Rose museum. Built in Chatham Dockyard between 1759 and 1765 she was the flagship of Admiral Lord Nelson and the ship on which he met his end in the Battle of Trafalgar in 1805. She carried an impressive 104 cannons and is at present undergoing major refurbishment. The main sign of this is that her top masts have been removed but the ship is fully open for visitors. Just a couple of pics from the many: Cannon on the port side: A gun deck

HMS Warrior
HMS Warrior was launched in 1860 and was the first armour plated iron clad warship. She was very much transitionary in her design. Apart from her armoured hull, a new innovation, she was a fully rigged 3 masted sailing ship with the addition of a large steam driven propeller. Her armament was even more significantly transitional comprising 26 muzzle loaders just like cannons, and 14 breach loaders very similar to military heavy guns of today. She is berthed afloat at another quay within the Historic Dockyard. More pics: 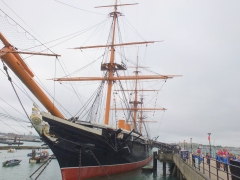 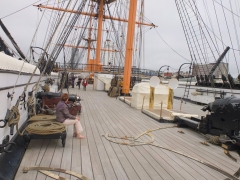 Warrior at her mooring: The main deck 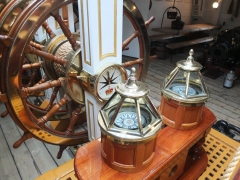 Gunwharf Quays
Portsmouth has a lively development near to the dockyard and on the waterfront. Gunwharf Quays is primarily a centre for shopping and socialising with many well known brand shops and outlets, and a wide range of restaurants, coffee shops and bars. Centre piece is The Spinnaker Tower, a sort of Portsmouth’s answer to Dubai’s Burg al Arab

There are three viewing decks, the highest at 110 metres. The glass is blue tinted so pictures are not very successful but the views across the harbour and the Isle of Wight are most impressive. 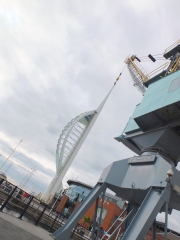 Spinnaker being lifted into place

NOT: Spinnaker and a figure head

If you are down in Hampshire, the Historic Dockyard is well worth a visit but be prepared to spend all day there to get most from your visit.

that was heart stopping !

The closest I've ever come to seeing ships like these is the " Discovery " at Dundee Scotland, below deck there was male models so real like

Quite fascinating all round and great photos Grandad.

The Mary Rose - gee - it is totally phenomenal that she lasted so long and then was able to be brought up from the depths and technology is now such that we can actually preserve her. Fascinates me too the actual body parts from the sailor and the ships dog skeleton were found. That is quite an impressive number of artifacts too. The size of the canon is huge. Can imagine having to actually fire one of those monsters? Just lifting the tools to load it is hernia making. Most all of the items carried on ship - pewter plates were for sure heavy. I know they had to make things to last but must've sure played on how fast the ship could go given that lots of its 'cargo weight' was coming from the guns and regular stuff used on it.

On The Warrior - the figure carved into the front of the ship - a man? And it seems rather Nordi motif kinda? Am not quite seeing it well and that is what is presents to me.

Very interesting your dockyards Grandad. Thanks for sharing with us

Thank you for your comments ladies, glad you like the pictures

Yes Kiya, there were some hairy moments when the hull was lifted. I remember watching on TV as it was lifted in its cradle after over 400 years. The statistics about the recovery are staggering. One that impressed me was that during the four diving seasons between 1979 and 1982, a total of 22,000 diving hours were spent recovering artifacts and preparing for the lift. That equates to nearly twelve man working years.

LLL, figureheads were not always of females. Nordic ones tended to be fierce looking to ward off evil spirits. Some would be a representation of the ships name for recognition by illiterates. In the case of HMS Warrior, the figurehead is that of a brave Greek warrior so it served both purposes of being threatening and also identifying the ship by name.

There are many fascinating facts about the Warrior. Most impressive to me is the fact that when under sail alone, her 26 ton propeller and drive shaft were winched up into a well to eliminate drag; and her telescopic funnels were lowered to not restrict wind flow to the sails.

I'm always amazed at historic buildings, houses, tools, modes of travel - all of it. When I compare it to what we make today (which - ok - can be pretty impressive too) but given what our forebears had to work with - the tools they had and used, the material they literally had to carve out of the earth what they turned it into was pretty darn impressive and how some of these things were put together way way way up there and out there with men hanging off scaffolds tied with ropes couple hundred feet up - WOW!

And, as you say the modifications they made were pretty impressive too. Really well thought out, designed etc. I'm saying too that way back when a design change was just a pop it out and slide another one in. This was MONTHS of slogging to implement a change in design (talking about the Warrior) and this says nothing of the hours of figuring and hand math it would have taken to draw out theorectical designs and test them and then put them into play. Again amazing.

As for the mast heads - not sure why I had it in my brain they were female but it makes sense that they'd be warriors to ward off evil spirits and everything that went bump in the night.

We get the 'Tall Ships' here every so often and I've gone to see them. SO many ropes and pulleys and everything that goes into making able to sail. The size is small considering the crew they carried, the cargo they carried and the distances they went. My Great Grandfather on my mothers side was a Sea Captain. His last name would have been Boyd.
Top

With an engineering background LLL I am always asking myself 'HOW'. In films and TV, set in the 16th century, we are often given the impression that things in general were very basic compared to today. And of course that is to be understood. But when I look at the cannons on the Mary Rose like this one that must weigh at least two tons,

I ask myself what kind of furnace did they have that could produce two or three tons of molten iron and how did they pour that iron into a sand mould which would have been created with a wooden pattern of the cannon.

Oh to have a time machine and go back and see for real how it was done.

PS LLL.....the figures on the prow of a ship are figure heads not mast heads. Mast heads or top masts are the top sections of tall masts on large sailing ships. This is Victory with her top masts struck (removed). Masts :doh: I know nada about this :doh:

I'm equally amazed at how such magnificent buildings were built, how huge statues were carved, poured, sculpted etc. The knowledge, which sadly WE have lost, was phenomenal. I marvel at long it must have taken just to do calculations. Pen and paper and ALL done by hand. Now we have benefit of calculators/computers so now we really do not have to hardly think. Back then given what they had to work with it was remarkable what they turned out. Quite agree - how did they cast a canon? HOW did they get that much molten metal and cast it.....??? Just boggles the mind how they did it and what they were able to turn out.

I also find it remarkable that many of the items were embellished. Some were plain plain but considerable work went into catering to esthetics. Given the work involved it really does show how people in earlier times really valued what they did, wanted it to be pleasing and appealing regardless of the amount of heavy work it entailed.
Top

Great pictures Grandad and a great day out by the looks of things, unfortunately it is a bit far away for a day trip. It certainly has a fantastic history attached to it and many fine programmes have been made about its discovery, reclamation, preservation and all the many theories about why and how it sank have made for some great viewing over the years.

Horus wrote:Great pictures Grandad and a great day out by the looks of things, unfortunately it is a bit far away for a day trip.

My days of driving several hundred miles in a day are long gone so on this occasion we stayed a couple of nights in Portsmouth so we could have a full day at the dockyard. Really glad we did too because after an eight hour day, mostly on our feet, we were shattered and no way could I have driven (safely) home