The quiet world of Japanese women in Egypt

Advice, information and discussion about Egypt in general.

The quiet world of Japanese women in Egypt

When Keiko’s fiancée was convincing her to move to Egypt after they married and his training contract in Japan would end, he told her Egypt was “exactly like Japan.” 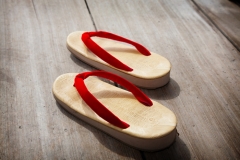 The differences, however, were apparent. Nevertheless, four years after she met her husband, Keiko became part of a growing community of Japanese women who moved to Egypt after marrying Egyptian men in Japan. Now a widow, Keiko, who asked to be identified by her first name only, is still living in Egypt with her son and is one of the most active members of a community of over 1,000 Japanese men, women and children.

There are around 400 individual members and about 56 companies who pay membership fees at the Cairo Japanese Club in Zamalek where Keiko volunteers, she says. The club has a security camera at the door and no signs to mark it. Coming from a culture that values its privacy, the staff asked that no pictures be taken.

The club is home to a large library of Japanese books, movies and newspapers. Membership is restricted to Japanese citizens. It started at the Marriot Club in the mid-1980’s and moved to its Zamalek apartment eight years ago. The club also produces a publication every two months with news on the community's activities. It organizes several baseball teams and a tennis club which play against other expat communities in Egypt.

An extensive report speaks about the Japanese school in Giza and it’s activities. The school currently has about 25 students, and is on the Japanese academic calendar that goes from April to March, with a 40-day vacation starting in July.

The Japanese Club also hosts an annual event called the Natsu Matsuri. The festival, taking place in October this year, is a celebration of Japanese traditions. The event attracts over 700 to 800 visitors a year.

MM, a 25-year-old Japanese-Egyptian, says the sense of family that the Japanese community builds is what makes them so close. “They are very helpful and know how to have fun together,” he says. When his mother is away, MM would normally contact his mother’s Japanese friends if he needs anything rather than his Egyptian family who is here.

The embassy is located in Maadi, and the majority of the community lives either in Maadi or Zamalek.

“Even after the revolution, although many people have security concerns, people movehere because their company orders them to,” says Keiko, “In Japan, if your boss says something you don’t argue, you just do it.”

With a strengthening Egyptian-Japanese diplomatic relationship, cooperation between the two countries led to various cultural and educational exchanges, resulting in an increase in the numbers of Japanese-Egyptian marriages. According to Keiko, “That is when many of those students end up meeting their future Japanese spouses.”

Ayah, who changed her name when she moved here 25 years ago with her now ex-husband, says, “Before I met my children’s father, Egypt was a dream.” She was learning English, and her ex-husband was learning Japanese while doing his PhD in Japan, when they met at an event organized by their common teacher.

Ayah speaks of Egypt with pride. “I love the language and being able to express my love to my children,” she says. “The language has so much emotion in it.”

Ayah got married at the age of 20, and was asked by her husband to change her name. “I really didn’t think,” she says. “Whatever my husband says, I did.”

Buddhism and Shinto are the major religions in Japan. According to Egyptian law, a Muslim is not allowed to marry anyone outside of Islam, Christianity or Judaism. Women are given the option to convert to any of those three religions, and most choose Islam at the start. Religion is largely a personal matter in Japan, while in Egypt, women are constantly subjected to questions concerning their religious practices.

The adjustments that Ayah, Keiko and many like them had to make to move to Egypt were many; however, most of these women end up staying in Egypt decades later, even with the chance to leave.

Ayah feels when she returns to Japan that she has to switch back to Japanese mode. She feels she has become more Egyptian, she says.

Both mothers, Ayah and Keiko, say they know how to cook Egyptian food but mostly cook Japanese food, because it is healthier. However, the surge of Japanese restaurants around Egypt does not leave them impressed. “This is not Japanese,” Keiko says laughingly. However, she cites one or two restaurants that she says have a Japanese chef, making it as close to home as possible.

The Japanese Club has a Japanese guide to Egyptian food, with details of Egyptian vegetables, meats, spices and the way they are handled.

Keiko says the Japanese and Egyptian customs concerning family are very similar. She also gives her late husband credit for protecting her and helping her navigate the differences that would have otherwise affected her.

Keiko is the co-founder of a group called Maleka, Arabic for queen, which was set up to help Japanese women married to Egyptian men get acquainted with the Egyptian culture, legalities and other information they may need when in Egypt. Currently there are over 100 members who mainly communicate through email and occasionally have general meetings.

Moving to a country with a completely different language, religion and customs can be difficult. However, the practicality and tight-knit nature of the Japanese community allows its members to cope easily and makes their time, however long it is, a happy one.

Re: The quiet world of Japanese women in Egypt

Interesting article Keefy. I'm by no stretch of anybodies imagination an expert on Japan. My eldest daughter lived and studied there for a year and so for a few years during my daughters' high school years we were exchange families etc. One thing I have noted and read about is that IN Japan you are either FULL Japanese OR you are not recognized. I know my daughter has a gf whose dad is Japanese and whose mom is not. She is basically not recognized in Japan as she is not full blooded Japanese.

I can see any group of people if exposed to another group form liasions and marriages etc but I sometimes wonder how the offspring fare?

I know my daughter always commented how paternalistic Japanese culture was. It galled her greatly that the Japanese male had much more freedom than the Japanese female and that most Japanese mom's totally doted on their sons and catered to their every whim. Many Japanese mom's too were also "paper drivers" in that while they had a driver's licence it was "paper" only as it was the Japanese dad who did the actual driving.

I'd be very interested to know how Egyptian families are welcomed (or not) by the Japanese families back in Japan?
Top
2 posts • Page 1 of 1